Many dog owners are confused by the Danish Dog Act. Here are the specific entry requirements by following the change in legislation. 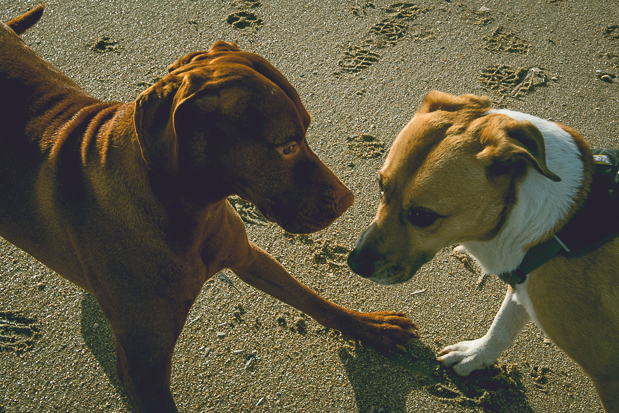 General apply for entry with dog to Denmark the EU directives:

For all dogs following provisions shall apply in Denmark:

On the beaches is from 1. April to 30. September, the obligation to keep the dog on a leash. In forests throughout the year there is an obligation to carry the dog on a leash. There is no prescribed routes to enter Denmark. Most likely you will not control the dog.
However, many dog owners are afraid of traveling to Denmark. Fear is probably the rather strict “Dogs Act“. This dog law was amended as of 1. July 2014 in large parts.
So may landowners no longer allowed to shoot stray dogs on their property. Repeated straying cost the dog owner now 270, – euro. The Danish police is no longer allowed to judge alone what is a dangerous dog and what animal is euthanized. This classification must now be carried out by an expert. This mainly concerns the “bite injury clause”.

For this purpose, writes the Danish foreign ministery
If a dog that was brought on vacation to Denmark, a human or another dog bites, it is the police who assesses concrete and decide to what extent it is a bite injury, and whether this is so severe that the dog be put to sleep got to. The new regulations allow the dog owner has the option of consulting a dog expert to ask before the police will make its decision. The circumstances in which the bite has come about to enter into the expert’s opinion, for example, if the bite has occurred during a game, or the like.

Situations where prohibited breeds may be imported

The dog was purchased before of 2010. If the dog was purchased at the latest by March 17, 2010, he must be brought to Denmark. Documents confirming the date of purchase, must be carried. The dog must be kept on a leash with a maximum length of two meters and with a muzzle, when he is in areas that sind.Das open to the public means that the dog may move without a leash on private, closed base. But he must be on leash when it comes to open area such as a campground or a non-enclosed summerhouse plot.

The dog must be leashed (max. 2 meter line)
The dog must wear a muzzle.
Demand documents must be presented on, which clearly shows that the dog have acquired prior to March 17 of 2010.
It should be noted that the races Pitt Bull Terrier and Tosa Inu are not allowed because they are prohibited in Denmark 1991 onwards.

Passing through dogs
The prohibition against certain breeds does not apply to dogs that are only in transit. The transport of dogs, which are prohibited by law, is thus allowed to continue if the dog does not leave the means of transport – apart from brief stays outside the transport means, when it is necessary to leave the dog – and if the transport without unnecessarily long stays is carried out in the country.