Granted. I fooled you again. Dog Beer falls somewhere in the category “absolutely useless” to “what the fuck?” A title like this could come from the industry, which sells the product namely as nutritional supplements. Existence do most of these beers by the way of meatbroth and malt.

After all, the “brewer” have recognized that alcohol is not quite as healthy, and have let it out. Carbonated is also missing. So should the brew stimulate the dog to drink more and Vitamin B wrote they also on the bottle. 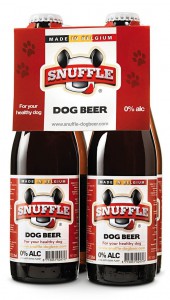 Interestingly, there are quite a few of these beers. Although for a long time on the market, this lifestyle has pasted me. I have my dog probably just neglected. All the years that I was drinking my beer alone on the couch and the dog looked at me longingly – a case for the protection of animals. Lonely women should this depression can fight with catswine. The audience determines the marketing. From my side, men are welcome to have cats and drink wine with Murle. Or the other way around.

Back to the beer. “Schwanzwedler- The beer for the German dog” in 2012 had probably problems with the German purity law. Therefore was not allowed to call more beer. After that, they stop the production. The joke was gone.

There are also some other ‘beers’, which are not reached of German jurisprudence on the market and but also available here. And although no alcohol is included, according to this review, caution is probably still commanded. Unstable dogs could have apparent failures or simply exploit the situation. But maybe you wake up together on the drunk tank.

Screenshot: AmazonI can only say CAUTION! At the beginning everything was ok, I met with Werner (english bulldog) perched on the couch and started to drink. After the first bottle he was his old self … ok a little mumbled he had there already. After 2-3 bottles he began plötzöich to be brazenly stole my butts and just took things out of the fridge! The already slow suited me no longer as in the stuff. But then it got worse … he began to barf (not only against me!), Even went to the street and insulted other people and the neighbors! Everything ended so that he began to be sic and pee the bed. Luckily, he fell asleep afterwards immediately. As I approached it, the next morning he knew nothing of him. Luckily, he has apologized and assured me that this never happen again. So I advise anyone just to offer a bottle and the rest locked away, for a nen nice evening for two ranges a completely restructured! Who’s like like harder, may also risk the whole pack.